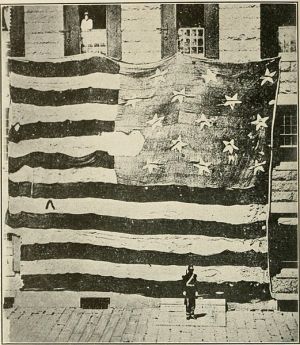 When I started working on Read Aloud Plays: Symbols of America for Scholastic back in 2001, the September 11th attacks on the World Trade Center hadn’t yet happened. (That July, in fact, Scholastic treated me to dinner at Windows on the World atop the North Tower.) By the time the book was released in January of 2003, those horrific attacks had led to a groundswell of American patriotism. We as a nation were unified behind the cause of defending our country against terrorism. Though hardly purposeful, a collection of plays designed to teach the history behind our “most patriotic symbols and holidays” seemed timely.

But then came the controversial invasion of Iraq. While I have my opinions about the Iraq War, I’ll leave that debate for another time. One outcome, though, was that the word “patriotism” was suddenly being lumped together with words like “nationalism” and “fascism.” We started questioning our patriotic roots. Not that I was concerned about sales at a time like that, but it came as no surprise to me that my book would never see a third printing. Here we are thirteen years later and we remain divided. Numerous events have us questioning our patriotic symbols now more than ever.

As we should be.

When I teach history to my 5th graders, the overriding message is that we should be constantly looking back at our past and using it to guide our future. That includes things like why Teddy Roosevelt appears on Mount Rushmore, why Thomas Jefferson is considered an American hero despite having owned slaves, and why MLK’s statement about the “content of our character” is more important than ever.

All that suggests Read Aloud Plays: Symbols of America may be even more valid today than it was in 2001. These plays provide innocent, politically-neutral histories of “patriotic” symbols such as the flag, the bald eagle, and the Liberty Bell. “War Stories,” for example, teaches the meaning behind Veterans’ Day by sharing the somber stories of soldiers whose names appear on gravestones. Another play, “A Bell for the Statehouse,” uses the history of the Liberty Bell to teach about the American Revolution.

I’ve repackaged all the plays from Symbols and made them available on TeachersPayTeachers. They come with improved comprehension activities, short paired texts, and detailed teacher notes including answer keys and extension activities. “Argument at Mount Rushmore,” for example, is a humorous play about the history of the monument in which the four “talking heads” explain why they’re featured there (excellent fodder for a discussion about slave-owning fore fathers and monuments). Plays about the flag, Vets’ Day, and MLK Day appear individually, while “Eagles Over the Battlefield” and “A Bell for the Statehouse” appear together in “Two Plays from the American Revolution.”  Finally, I’ve just released “Two Plays from The War of 1812.” While 1812 probably doesn’t appear in your middle grade standards, these plays provide engaging histories about the Star Spangled Banner and the White House. Ultimately, though, they’re great jumping off points for classrooms to dive into discussions about American history as a whole. At a time when we’re so divided and facing such gargantuan problems, presenting our kids with facts and details about our past seems more appropriate than ever.